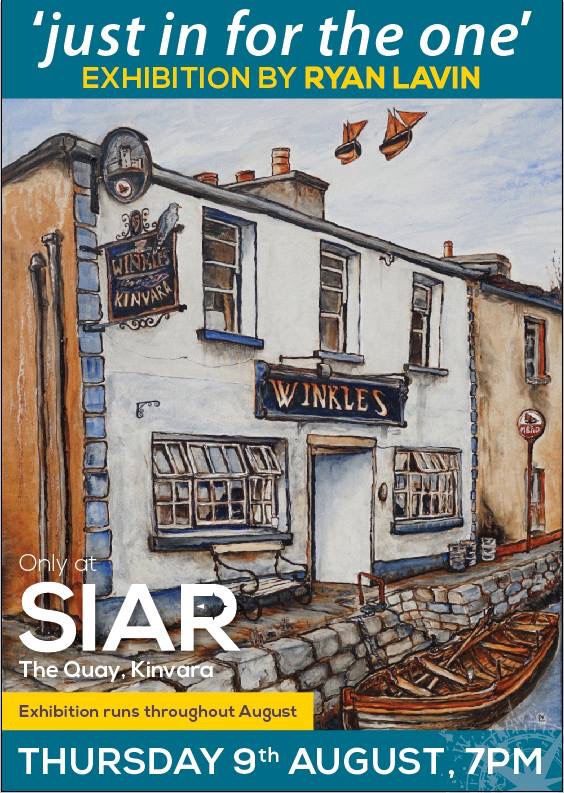 ‘just in for the one’
Inaugural exhibition by Galway’s Ryan Lavin
SIAR, The Quay, Kinvara- 9th August 7pm

Irelands newest oil on canvas work comes to Siar in Kinvara on 9 August with an exhibition titled ‘just in for the one’ by Galway artist Ryan Lavin. The show will coincide with the 40th Cruinniú na mBád in Kinvara and will run throughout August.

The exhibition features 22 previously unseen works by Lavin, raised in Ballinderreen, who then lived in Virginia where he spent six years playing banjo. This is his first full show and depicts Galway pubs, music and people, the beautiful hookers (turf boats) of Galway and some of Kinvara’s iconic places and people.

“I think it was my mother who first suggested I should paint pub scenes and my father who actively encouraged it. It was certainly from my mother that I got the artistic gene. I was always keen to return home to Galway. Delighted to be living back here again! If it weren’t for the seagulls I’d give it a nine.”

The exhibition will be opened by dancer, actor, singer and Kinvara native
Stephanie Dufresne at 7pm, Thursday 9 August and will run throughout the month.