The Cripple of Inishmaan, a comic masterpiece by Martin McDonagh, will be staged in Kinvara Community Centre on Saturday, February 24th at 8.00pm. ‘Ireland mustn’t be such a bad place, so, if the Yanks want to come here to do their filming’ Set in 1934, on the remote island of Inishmaan off the west coast of Ireland, there is great excitement when news arrives that a Hollywood film is being made on the neighbouring island of Inishmore. The one person who wants to be in the film more than anybody is young Cripple Billy, if only to break away from the bitter tedium of his daily life. This promises to be another superb production by Clann Machua Drama Group from Kiltimagh who have performed here on two previous occasions. Tickets at €10 will be available on the door or can be purchased in Be Yourself Boutique and Market Square Surgery. Please come along to support and tell all your friends & family! In aid of Kinvara Twinning Association. Follow us on Facebook – www.facebook.com/kinvaratwinning 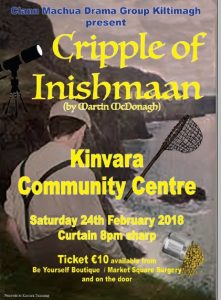