KAVA (Kinvara Area Visual Arts) West meets East II 24th March to 8th April 2018. While travelling in North Africa, Andalucia and South East Turkey, Kinvara based artist Anne Korff was impressed by the abstract and meditative qualities of Islamic art architecture.  She noticed that many of the symbols and motifs used in prehistoric cultures were also used in Christian, Islamic and Celtic designs, suggesting common origins. Korff subsequently began using some of these elements and motifs in her own work.

Anne hopes to encourage the viewer to embrace cultural diversity and to open a dialogue which might help to build bridges between the Christian and Islamic worlds.

Anne Korff studied Fine Art in Berlin.  She came to Ireland in 1977 and in 1987 she set up her own publishing company, Tir Eolas, which originated from her interest in history and archaeology. For the past 10 years she has been a full-time painter. Further information at: www.annekorff.com 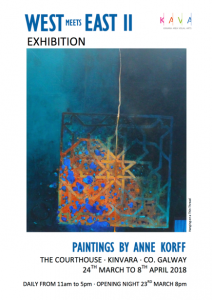